Sarah Nahar neé Thompson (she/her) is a nonviolent action trainer and interspiritual theologian. Now as a PhD candidate in Syracuse, New York (Haudenosaunee Confederacy traditional land) she focuses on ecological regeneration, community cultivation, and spiritual activism. She is currently a senior member of the Buddhist Peace Fellowship board of directors. Previously, Sarah was a 2019 Rotary Peace Fellow and worked at the Martin Luther King, Jr. Center in Atlanta, Georgia. She is a member of the Carnival de Resistance and has been the Executive Director of Christian Peacemaker Teams. She attended Spelman College, majoring in Comparative Women’s Studies and International Studies, minoring in Spanish. She has an MDiv from Anabaptist Mennonite Biblical Seminary in her hometown.

Sarah Thompson is a scholar-activist from Elkhart, IN. She received a Masters of Divinity from Anabaptist Mennonite Biblical Seminary immediately before departing for work at Sabeel Jerusalem (2011-2012, through Mennonite Central Committee). She has been formed by travels to five continents through volunteer work with Mennonite World Conference, feminist anti-war movements, women’s soccer teams, the Fulbright Scholarship, and Spelman College (graduated in 2006 with a Comparative Women’s Studies & International Studies double major, and a minor in Spanish).  Her current growing edges are related to her interest in postcolonial theology, social movement building, embodied nonviolence, acupuncture, menstruation, and alternatives to robotic warfare and society. 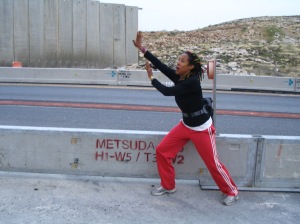